Space. If Amsterdam Zuid is short of anything, it’s space. Every extra square metre that can be saved should be cheered. Hardly surprising therefore that the borough chose to install Sidcon’s underground Presstation a year and a half ago.

“Our waste solutions should not be at the expense of parking spaces”. The proposition was clear. Accordingly a decision was taken to put out a tender for the installation of underground containers in the Oud-Zuid part of the borough. Sidcon was awarded with the contract, not just in terms of price, but also because the Presstation met all the quality criteria.

“We tested all the containers as part of the tender, including the Presstation. There’s always some element of risk when trying out a new product, but the test soon eased our worries. The range of underground containers was small since the market was still in its infancy. We were still in the orientation phase and our main priority was to make savings in space. With that in mind, the underground compactor made perfect sense,” explains Ronald Boekhout van Solinge (waste management manager for Amsterdam Zuid).

“It saves on the number of collections”

So Sidcon’s Presstation came out top and now, one and a half years later, no fewer than 100 of these underground containers adorn the streets in the Oud Zuid, Hoofddorperplein and De Pijp neighbourhoods. Do the positive reviews of the Presstation from its trial period square up with experiences of using it over a longer period? Marcel van Keuk, who is responsible for overseeing waste collection, is clear on the matter: “Yes, most definitely. A lot more can go into the compactors than a normal underground container, so fewer containers frees up more space for other things. One big plus is the Presstation’s monitoring system which notifies us when the container is 80% full. That saves significantly on the number of collections. Less traffic also means less pressure on the environment. That’s an important advantage.”

And what about breakdowns? “There are few breakdowns, but if something does go wrong, help is quickly on hand. Although it has to be said last New Year was a little nerve-racking. As a precaution, we’d sealed up all Presstations because of the fireworks. And when it came to 1 January, we couldn’t get them to open because the 4G network crashed because of people texting New Year messages. But we soon had that fixed in the early hours of the morning,” explains Glenn Jainathsingh (manager of underground collections).

The three gentlemen from Amsterdam have some clear words of advice for other municipalities faced with similar such choices. “Take a look at what we’ve done and see how it works for yourselves. Anyone is welcome to visit! And take a closer look at where we’ve installed the Presstations. By placing them in the most densely populated parts of the borough, residents don’t have to walk far to get rid of their rubbish, so the streets are cleaner, there’s less litter lying around and the traffic is less congested. It means we can work more effectively and residents can get rid of their rubbish 24/7. Winners all round,” concludes Boekhout van Solinge.

Want to see what’s happening in Amsterdam? If so, just contact Sidcon.

See for yourself the difference in space: 4 containers next to each other …

.. Of just 1 compactor using exactly the same capacity. Isn’t that what you want too? 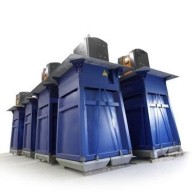